My interest in the warrior way of life stems from my Maori heritage – once a Spartan-like society that developed over centuries of inter-tribal warfare in what is now New Zealand.

Jared Wihongi’s life and career is built on the warrior spirit of his Maori ancestors. He has practiced martial arts since he was ten living in New Zealand, and the Filipino style of knife fighting, since he was twenty, 20+ years ago. He also has his own signature line of edged weapons through Browning, knives that he hopes inspires “the warrior spirit that lives in each of us.”

Jared has reached the Tuhon or “Master” level of Pekiti Tirsia Kali and instructs police officers and elite military operatives in what he calls Close Quarter Force Integration Tactics, or CQ-FIT. He applies the circular arm movements, the footwork, angling and distance control of Pekiti Tirsia Kali, using empty hands, sticks, knives and even guns, to reality-based training so that police officers are better able to subdue threats, or a special forces member is able to eliminate enemies in close-quarter combat.

Jared’s mother hailed from the Lone Star State, but decided to move to Utah as an elementary school teacher. Jared’s father, living in New Zealand, attended a private school run by the Church of Jesus Christ of Latter Day Saints. He excelled and was granted a scholarship to attend a university, also in Utah. The rest is history. By the time Jared was 1, the couple had returned to New Zealand, raising a brood of six. 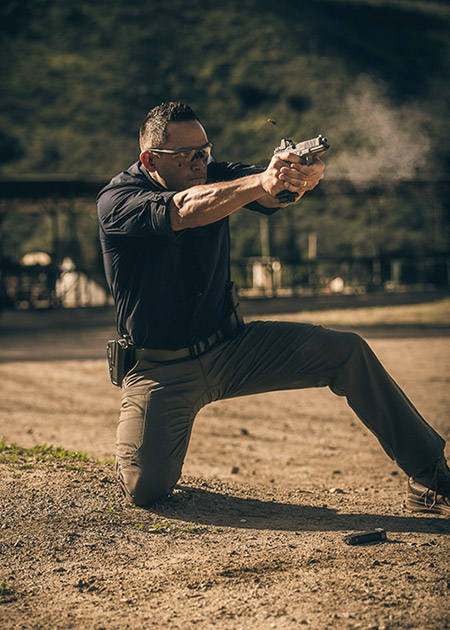 Although native Maori only make up 15 percent of the New Zealand’s Population, the Wihongis lived in a small town that was predominantly Maori. Having grown up in the 1950s when there was little opportunity for Maori youth other than to become farmers, Jared’s father put great importance on education and became a High School Principal.

Two of his sons followed in his footsteps, but Jared and another brother became police officers, with Jared going on to become a SWAT operator for 17 years and counting. He now teaches knife-fighting skills (among other things) to SWAT teams and elite special forces in the U.S. and allied countries. “I’m an educator too,” Jared said, just in the warrior arts and lifestyle.

In this video, Browning’s tactical knife expert Jared Wihongi gives insider tips on the role of knives in tactical situations. Jared is the co-designer of the Browning Black Label Tactical Knife series (working with Russ Kommer). They have created not only a line of superb quality blades, but also knives that actually deliver in tactical situations. Watch this video and you will know why. Jared is an expert with knives and has extreme training. His background is as a police officer and SWAT team member.

Jared Wihongi is an expert and professional trained in bladed weapon defense methods and techniques. Never train or practice these techniques with knives or other blades without expert supervision.

Jared Wihongi is internationally recognized as an authority in the area of Close-Quarters Combat Instructor (CQC).

His specialization is the integration of firearms, impact weapons, edged weapons and empty-hand combat with heavy emphasis on police, military and self-defense application.

He has 20 years of experience working as an Operator on three USA SWAT Teams, which has heavily influenced his approach to teaching and applying close-combat tactics.

Jared has over 34 years of training in various striking, grappling and weapon based martial arts from around the world, and is one of only a handful of people globally who hold the advanced rank of ‘Tuhon’ in the Filipino combat art of Pekiti-Tirsia Kali. He is widely recognized as one of the world’s foremost authorities on the modern tactical application of the combat art of Kali.

Jared founded the Pekiti Tirsia Tactical Association, an international martial arts association that has thousands of members and affiliates around the world.

Jared is the International Master Instructor for the BONOWI Training Division, the only official international training program for the German made Camlock Baton.

Jared is a regular instructor for the world’s largest and most prestigious tactical law enforcement association, the NTOA (National Tactical Officers Association).
Jared’s brand of CQC called TRICOM has been adopted and accepted by some of the world’s most elite police and military organizations around the world, and is accredited on it’s own merits.

Jared has been contracted as an official Close-Combat Instructor for U.S. Army Special Forces Units (Green Berets) off and on since 2005. Since 2007, Jared has been retained as a consultant to develop & teach the Tactical Baton training programs for Germany’s BONOWI Camlock “EKA” Baton. He has been retained by several international companies as a consultant in the area of tactical knife design, and is currently retained by Browning Firearms as the Tactical Consultant for their Black Label brand of Tactical Blades and equipment. In 2010 Jared was featured as a subject matter expert on season one of SPIKE TV’S hit series Deadliest Warrior.

Jared has been invited as a special guest instructor at the following international police training conferences:

CLIENT LIST
Over the past 16 years, Jared has taught CQC (both armed and/or unarmed) to the following organizations: